Google's smartwatch platform just underwent a major rebrand with the introduction of Wear OS to take over from Android Wear 2.0, and we've just seen the first watch to launch with the new name… but it's not what you'd expect.

The first Wear OS watch is the incredibly titled Hublot Big Bang Referee 2018 FIFA World Cup Russia. That's a mouthful, and as the name suggests this is a tie-in watch to this year's big football tournament in Russia.

Hublot is the official timekeeping brand for the World Cup and each of the referees will be wearing a version of this watch to receive goal line technology notifications to ensure a team has scored.

Goal line technology is already in use in professional leagues around the world, but this year's World Cup will be the first time the technology has been used in the international tournament.

We're at Baselworld 2018 right now, and the Big Bang Referee 2018 FIFA World Cup Russia is on view at the stand, but it's not the exact version the officials will use during the games later this year.

Apparently the referees will have all of the features of the Wear OS watch and more, so they'll be able to play around with features that count down the days, hours, minutes and seconds until the next game or keep track of other games when they're not on the pitch.

If you're worried about the shortcomings of referees using Wear OS watches during the game, apparently FIFA has already tested an early version at games last year and obviously deemed it accurate enough for the world's most important football tournament.

The watch follows Hublot's design ethos with a bulky design, but unlike its other watches it features a 35.4mm diameter AMOLED display in the middle with an okay 267 pixels per inch. 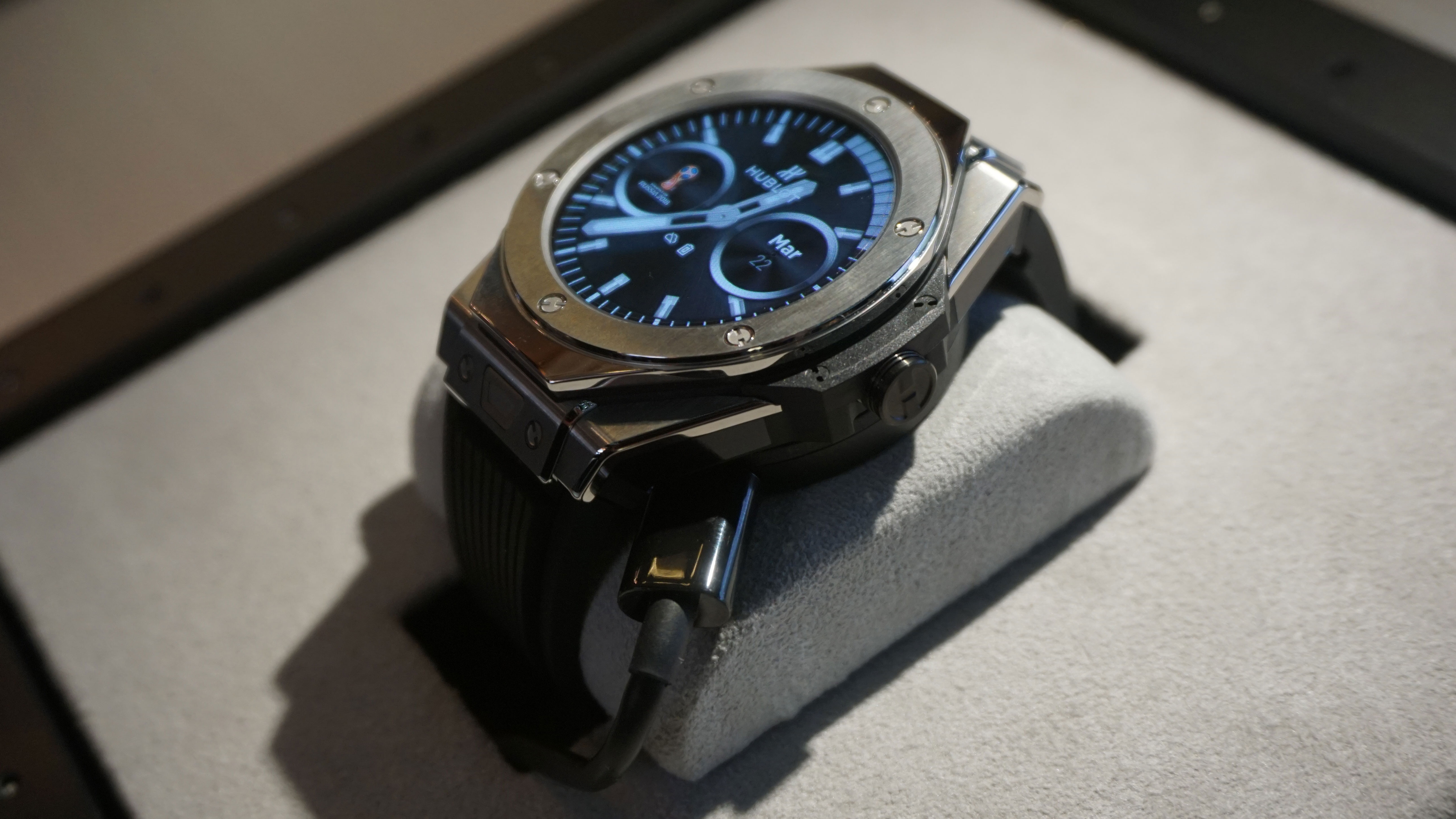 It's running the same processing setup as we saw in the Tag Heuer Connected Modular 45 (an Intel Atom Z34XX) with 512MB of RAM and a 410mAh battery the brand reckons will only last a full day from a single charge.

The specs aren't anything to get excited about, but is the only official World Cup watch so if you want to have an official countdown to the competition on your wrist and real time updates of each and every game this will be perfect for you.

When we tried the watch we were able to see a demo of how Hublot expects a game to work, and it showed us a countdown to every game, the stats of each team, the teams playing and then notifications for goals and events like yellow cards.

Don't think you'll be able to watch each and every game live? This may be one of the most efficient ways to get the World Cup results first… but the watch doesn't come cheap.

That's a lot of money considering the main selling point of the Hublot Big Bang Referee will only last a month, but you'll still have a high-end and solidly built Wear OS toting watch at the end of the competition. 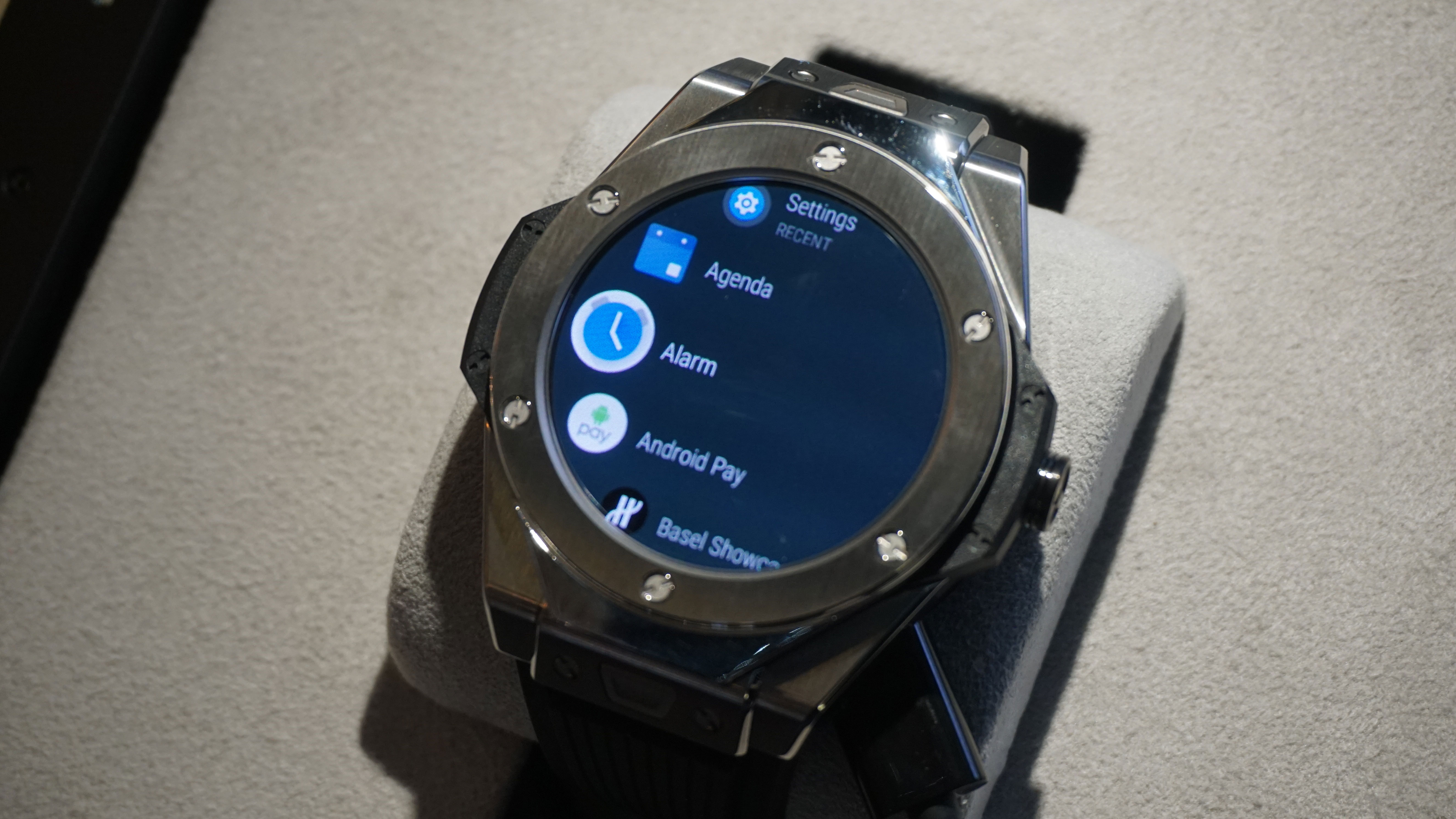 There’s no big song and dance about this being the first ever Wear OS toting watch on Hublots stand. It makes sense the brand wants to highlight its partnership with the world's biggest football tournament, but considering this is a landmark device for Google's smartwatch technology it's remarkably quiet.

We already thought it was quite strange for Google to rebrand Wear OS without any new devices or sharing updates on how the new software will effect users, but this is just another weird step toward us seeing lots of new Wear OS watches.

That said, it's quite fun to realize some of the most important people in the 2018 World Cup will be brandishing Wear OS devices on their wrists while sporting history is made in Russia.