Amazon helped pioneer and now dominates the online marketplace business model, where a variety of merchants post items for sale on its platform for billions of consumers to discover and buy them. Today, a London startup that’s taken that idea but is applying it to a far more curated set of retailers and goods has raised some money to fuel its international growth.

Trouva, which provides an online marketplace for brick-and-mortar independent boutiques selling “beautiful” and hard-to-find pieces — think Farfetch but less fancy and less high-end design — has raised £17 million ($21.8 million) in funding, money that it will be using to expand outside of the UK on the back of a strong launch in its Berlin last year, as well as to continue building out more technology on its platform, specifically around inventory and logistics management.

The funding is being led by Octopus Ventures, C4 Ventures (the venture firm launched by Apple vet Pascal Cagni) and Downing Ventures. BGF and LocalGlobe were also in the round, which brings the total raised to about $36 million. Mandeep Singh, who co-founded the company with Alex Loizou and Glen Walker, said in an interview that the startup is not disclosing valuation.

Amazon may dominate our consciousness (and for some of us, our wallets, with its sticky Prime perks) when it comes to browsing for a variety of goods online, buying them, and getting them delivered to us in an efficient way.

But the Amazon way leaves a lot out of the proposition: for retailers it doesn’t give them a lot of leeway in how they present items, and they have to compete with many thousands of other offers (including Amazon itself) to get their products seen.

This opens the door to a multitude of different competitors, and there is where Trouva has stepped in. Where Amazon gives us the promise of everything, the smaller startup has effectively incorporated scarcity into its DNA.

“We are very picky,” Singh said. “We have to turn down the majority of applications from stores that want to sell on our site. We are looking for the very best curators. Having every single vase in the world is less important than having the best one, curated by an expert.”

While we are continuing to see a surge of purchasing via the web and apps — a trend that will get played out during holiday shopping in the weeks ahead — analysts estimate that some 85% of retail is still happening offline.

Within that group there is an interesting core of brick-and-mortar independent shops: At a time when large chains and the likes of Amazon are shifting the sands for how people sell things — and certainly how people shop — there remains a large group of independent retailers — “curators,” as Singh describes them. These shops target consumers with disposable income, people who are looking for more unique things to buy with their money. 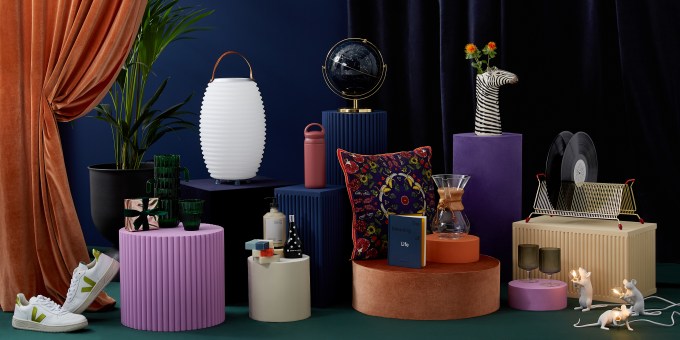 The challenge of the ‘High Street’

Independent stores are often under threat in cities like London. First, they pop up in areas where rents are not as high, with like-minded people congregating to live in the same neighborhoods for the same reason. There, they sell a small selection of not-cheap clothes, interesting home goods, a variety of tchotchkes, or quirky gifts and develop a local following.

But their emergence can also often signal wider tides of gentrification. Ultimately, that shift is what moves those stores out as the rents subsequently go up, and bigger chains and fancy boutiques move in. (SoHo in NYC is another classic victim of this trend.)

Be that as it may, Singh notes that there are still more than 20,000 independent shops in the UK. “And we are working with 500 of the very best,” he added.

The company’s biggest competition, to my mind, are other players that are also looking to target the same kinds of shoppers online, for example, another UK site, Not On The High Street, or Etsy, which focuses less on retailers and more on makers. Similarly, there is the prospect of stores building their own sites, although that comes with its own set of headaches that independent shopkeepers may be less inclined to deal with.

“Yes, it’s very easy for an independent brick-and-mortar boutique to set up an online shop. That’s the easy part,” Singh said. “But what you find with independents is that building a website doesn’t help drive customers. There is a range of backend technology that we take care of, including inventory management software and handling the logistics of shipping. All of those can be difficult for a [physical] boutique to do on its own. It’s easy to sell online but you still need someone who has the economies of scales to pick up and deliver.”

On the other hand, he notes that “Amazon definitely doesn’t worry us.”

“We position ourselves as the complete opposite. Giants like that are too focused on categories that work well,” he added. Notably, he believes that the biggest threats are the same ones that threaten the independent stores that use Trouva to sell online: “Offline chains, those who sell homewares and clothes. The big guys.”

Trouva has no plans to move into selling its own goods, or to work with other online retailers, although it might consider down the line how it could leverage warehouse space to help its retailers with their inventory management (since many of these shops are very small indeed). “One hundred percent of our supply comes from our brick and mortar store partners,” he said.

Nor does it currently have anything like a Prime-style loyalty program. It does work with retailers and shipping partners to provide an end-to-end shipping service from store to buyer, with options for next-day delivery if it’s necessary.

“The relationship is mutually symbiotic with the boutiques, who benefit from a broader customer base, better priced and efficient delivery and stock tracking and management software from Trouva, and in turn higher revenues and improved profitability,” said Jo Oliver, a venture partner at investor Octopus. “As more boutiques are added the customer proposition becomes more and more attractive, particularly as Trouva’s footprint expands internationally.”

Singh notes that there is “exclusivity” for the shops that eventually come on to Trouva, although that’s almost by default since they are the kinds of small operations that are unlikely to be in the business of trying to expand their online presence.

Amazon has been working hard to improve how it interfaces with and curates items on its site to provide products, and a marketplace selling service, to the same consumer and retailer demographics that Trouva (and others) target. That’s unlikely to disappear over time, especially since Amazon plays the long game, where it will gradually tinker with an idea while at the same time quietly shift our shopping habits to match what it is producing.

“Online sellers like Amazon and eBay have tried to make a better experience, but it’s very hard for a business to change its DNA,” Singh said.