It's flagship smartphone camera comparison time at TechRadar. Our test subjects are the Google Pixel 2 XL, Apple’s iPhone X and the Samsung Galaxy S9 Plus, and we're focusing on the portrait modes across all three phones.

Blurring the background of a photo while keeping the foreground tack-sharp used to be a mark of quality reserved for DSLRs and high-end bridge cameras.

Thanks to today's smart camera phone software, however, shooting in portrait mode means it's easy to achieve relatively convincing background blur, or bokeh, on flagships like the Google Pixel 2 XL, iPhone X and Samsung Galaxy S9 Plus.

What's special about these phones is that the portrait mode works on both the front and rear cameras, so we put all three smartphones to the test, in both indoor and outdoor lighting conditions, to find out which is the best at capturing that coveted bokeh effect.

All three phones were set to the default settings within their respective portrait modes. If a beauty filter is applied, so be it.

The reason we opted not to turn on or off any additional features was to make the test represent how we think most people will use these modes – at their default settings.

As for the judging panel, six TechRadar experts were asked to rank their favorite photos. We judged them not just on the accuracy of the background blur, but on the overall quality of everything from exposure to contrast to saturation.

We've included the original photos at the bottom of this article, so you can judge all three phones' samples for yourselves.

Now that's all taken care of – let's get on with the tests!

With all three phone sensors featuring the same 12-megapixel resolution, detail should be comparable across all.

That said, Samsung's Galaxy S9 Plus loses out on the detail front, suggesting from the start that an aggressive beauty filter is applied to shots taken with its rear camera.

The Galaxy S9 Plus picture is also brighter than the other two shots, further flattening the subject and flattering him in the process. While the results aren't accurate, some may prefer Samsung’s stylistic way of tweaking its portraits.

In its favor, the S9 Plus also produces the most accurate background defocus effect of the three phones, with minimal artificial error around the hair and a consistent blur across the whole background.

The iPhone X's picture is higher in contrast than those from the other two phones, picks out a respectable amount of detail in the face, and offers decent background defocus accuracy. Results are nicely saturated, and overall it takes a good shot that proved popular with our panel.

As for the photo from the Google Pixel 2 XL, saturation is somewhere in between that of the Galaxy S9 Plus and iPhone X images, as is contrast, making it the most pleasing of the three. Detail in the face is also strong, with the whole shot coming together very well from a photography point of view.

While it’s off to a strong start, however, the Pixel 2 XL produced the worst background defocus of the bunch – note the inaccuracies around the hair and upper portions of the background. It’s also worth noting that the Pixel 2 XL takes portrait mode photos with a wider angle of view than the competition.

Despite not producing perfect blur, the Pixel 2 XL still won our judges' hearts, with its portrait mode photo looking more balanced overall. So it takes first place in round one, followed by the iPhone, with the Galaxy S9 Plus trailing behind.

When taking a selfie, the Samsung Galaxy S9 has the widest angle of view. Consistent with the rear camera in other ways, it produces the brightest shot, and applies the most smoothing to the subject's face.

Meanwhile, the iPhone X selfie showcases higher contrast, perhaps too high in parts of the face, prioritizing accuracy over flattery. What's most impressive about the iPhone shot is the way it appears to grade the background blur intensity on the wall.

While the Pixel 2 XL and Galaxy S9 Plus look like they simply cut out two layers – face and background – the iPhone X's Face ID seems to understand that the portion of the wall directly behind Gareth, our subject, is closer than the far end of the wall.

It's also worth noting that when we were shooting the outdoor selfie the iPhone prompted us to move to less bright conditions, impeding our ability to take a shot at exactly the same time as with the other two smartphones. With neither of the other phones throwing up on-screen warnings at any point during our tests, this could be something for anybody who likes to shoot in bright conditions to bear in mind before picking up an iPhone X.

As for the Google Pixel 2 XL, once again its picture fell in between the extremes of the other two phones' shots in terms of contrast, saturation, exposure and beautification. It captured a good amount of detail while still flattering – Gareth's face looks realistic, and the separation of background and foreground is nice and clean.

This means the Google Pixel 2 XL comes first in round two, making it our outdoor portrait mode king, with the other two phones tieing in second place. But what happens when we move to artificial lighting?

Time to strike a pose for some indoor portraits in artificial lighting. Kicking off with the Galaxy S9 Plus at a distance, the beautification applied here actually looks good.

It's clearly smoothed things out more than the competition, but detail across the whole picture is strong. The photo also appears less washed-out than the camera's outdoor shots, suggesting that indoors may be where the S9 rear camera's portrait mode thrives.

As for the iPhone, we're not sure what went wrong here – the white balance is totally off, and Gareth's face is also far too highly-contrasted, blowing out the shine on his forehead in a very unflattering way.

Meanwhile, it looks like the Pixel 2 XL can do no wrong. It has produced a shot that clearly separates the foreground and background, and manages to retain detail in the face despite shooting at the widest angle of the three.

And so, in this round, the Pixel 2 XL once again takes top spot, with the Galaxy S9 Plus ranking second and the iPhone third. 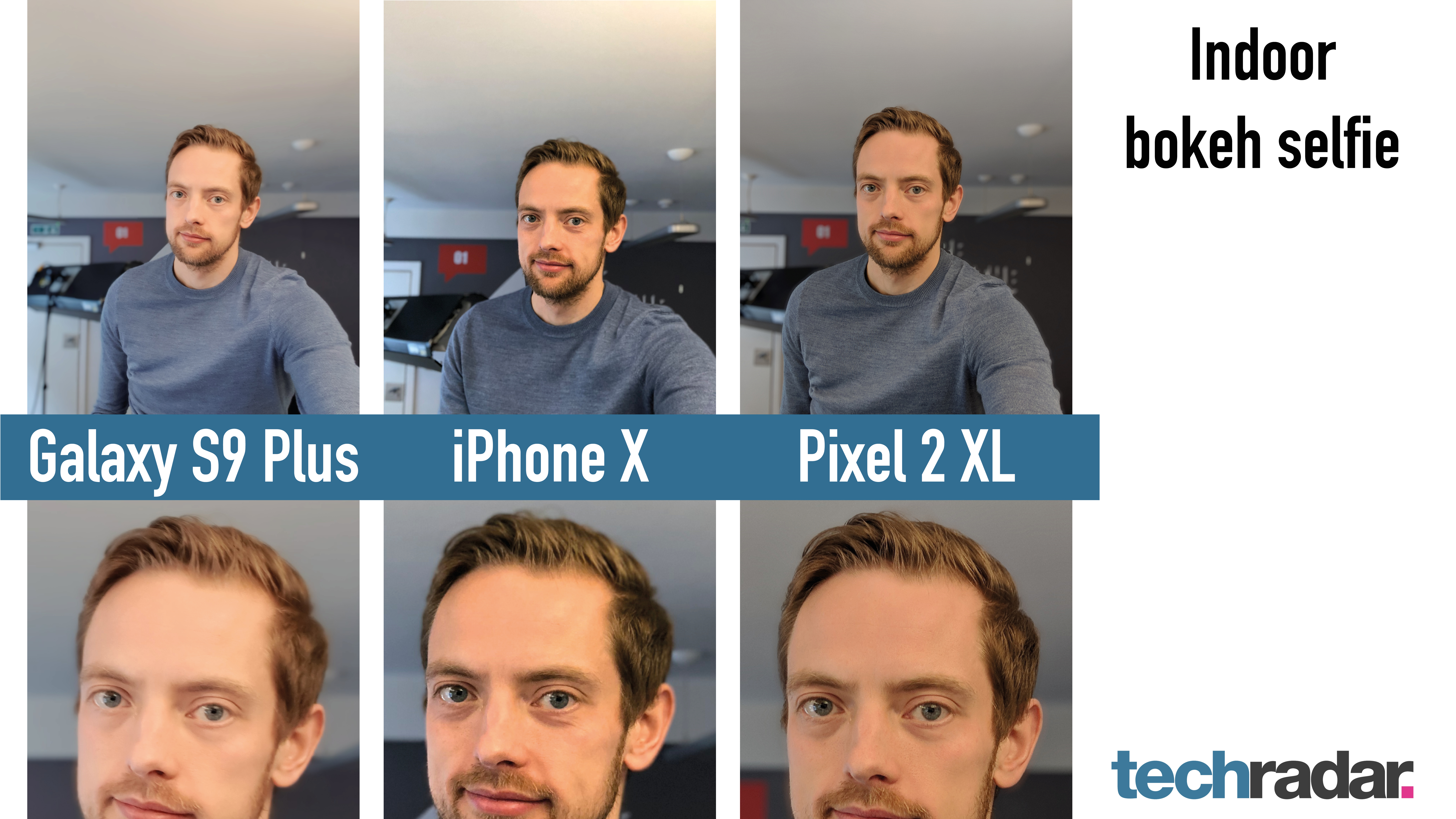 For our final round we took a selfie, indoors, under artificial lighting and with some natural light leaking in to make things even harder for our three smartphone cameras.

Despite the Samsung doing better in the last round, its signature beautification has scuppered its chances of claiming overall victory as our test draws to a close. Between face flattening (and whitening), eye brightening and general overexposure, the Galaxy S9 Plus' selfie portrait mode falls short, placing it in third.

The iPhone X has managed to make up for a poor performance in the last round though. Here its shot has managed to capture a decent amount of detail in the face, with the extra contrast making Gareth look more 'human' than the other two smartphones' selfies.

While the Pixel 2 XL has managed to create the most accurate background/foreground separation in this round, some of our judges felt that Gareth's face looked a bit too flat compared to the iPhone image.

As a result, despite this being a very close final round, with only one point in it, the iPhone X clinches victory.

There are a handful of conclusions we can draw from our portrait mode comparison tests.

The first is that Gareth's modeling skills are matched only by his reviewing skills – you can check out his Google Pixel 2, iPhone X and Samsung Galaxy S9 Plus reviews, complete with a range of photo samples from each phone.

The second is that you don't need two cameras to take a good portrait mode picture, with the Google Pixel 2 XL and its single rear camera coming out on top in three of our four tests. It also reigns supreme with its selfie camera, making it our unequivocal winner.

Third, there's more to a good portrait mode than accurate background blur. The way to win the hearts of photographers – and subjects  – is to prioritize the basics: exposure, contrast, saturation, clarity and color accuracy.

And finally, if your phone's camera makes you look super-smooth, bright-eyed and eerily childlike, check to see if beauty filters are applied by default. If they are, as is clearly the case with the Samsung Galaxy S9 Plus, you may want to switch them off, if you can.