Google Maps will soon begin testing a new feature that’s more common to social networks like Facebook, rather than a maps app: the ability to find and follow other users. In Google Maps’ case, it’s specifically rolling out the ability to follow top “Local Guides” — its community members who actively review business and share photos and other knowledge to Google Maps, as part of a larger rewards program.

The Local Guides program launched in 2015 as a way to take on Yelp Elites, by allowing the most active Maps contributors to earn status as a tastemaker of sorts for their own hometown. Guides write more in-depth business reviews and post photos in order to help other Google Maps users learn about the area.

In exchange, they receive a variety of perks like early access to new features, exclusive local meetups, free access to Google services, discounts and coupons, and more. 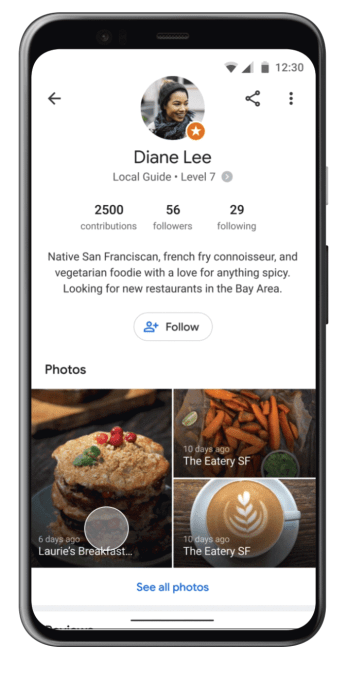 Now, Google says, it it’s kicking off a pilot program that will allow Google Maps users in select markets to follow top Local Guides by clicking a new “Follow” button on these users’ profile pages. By doing so, the Guides’ recommendations will be surfaced for you when you’re using Google Maps. In a new section on the “For You” tab in the app, you’ll find the area recommendations from the Local Guides.

Google is piloting the program in Bangkok, Delhi, London, Mexico City, New York, Osaka, San Francisco, São Paulo, and Tokyo, for the time being. Presumably, if all goes well, it would expand to more markets.

The feature is the latest move by Google Maps to take on Facebook as the first stop for discovering area businesses and keeping up with their news, events, sales, and more. Just over a year ago, Google rolled out a “Follow” feature for tracking businesses on the Maps app, which later expanded to iOS. This summer Google launched a host of tools for local businesses that allowed them to update their photos and profiles on Google Maps, claim a short URL, and send offers to customers — all features that challenge Facebook Pages.

But until now, Google’s focus has been on getting users to follow and interact with businesses themselves, not other users. 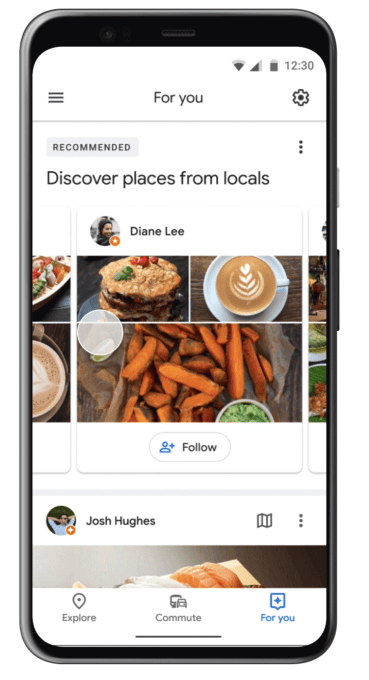 Of course, there’s one big caveat to the Local Guides program in terms of using it as a good source for business information: it’s crowdsourced info from regular people, not professional critics or reviewers. That means the quality of the Local Guides’ reviews can be fairly hit-or-miss. Meanwhile, Google seems more concerned with Local Guides’ engagement and quantity of reviews, rather than review accuracy or quality.

Often, the Local Guides’ reviews lack any criticism, but are simply non-detailed posts about the business in question. For example, many restaurant reviews don’t say much more than “the food is amazing! can’t wait to go back!,” or some variation of this with a few more words. They often read no better (and sometimes much worse) than the other user reviews on the Google Maps app. That’s not to say all Local Guides’ reviews are unhelpful — many do make an effort — but just seeing a review labeled as being from a “Local Guide” is no indication of the review’s quality.

However, the new recommendations feature coming to these 9 test markets will focus more on the Local Guides’ photos, rather than their words. On the “For You” tab of Google Maps, their recommendations will be on display in the form of photo collages — only by clicking through will you see what they wrote. The effect is one where there’s a bit of an Instagram-like feel to the Google Maps app.

The new feature was announced at Google’s annual Local Guides summit. Here, Google also shared how its Local Guides community has grown to around 120 million people across 24,000 cities and towns. But this is another confirmation that the company is celebrating user growth, but not necessarily with an eye on review quality. Unfortunately, if Local Guides can’t all be trusted to offer compelling, detailed and fair reviews, people will not consider them of interest, and won’t be compelled to “follow” anyone here for those sorts of recommendations.

Google didn’t say when the “Follow” feature would launch into pilot testing in these markets, just that it would be arriving “soon.”