The Catalyst Fund has gained $15 million in new support from JP Morgan and UK Aid and will back 30 fintech startups in Africa, Asia, and Latin America over the next three years.

The Boston based accelerator provides mentorship and non-equity funding to early-stage tech ventures focused on driving financial inclusion in emerging and frontier markets.

Catalyst Fund will choose an annual cohort of 10 fintech startups in five designated countries: Kenya, Nigeria, South Africa, India and Mexico. Those selected will gain grant-funds and go through a six-month accelerator program. The details of that and how to apply are found here.

“We’re offering grants of up to $100,000 to early-stage companies, plus venture building support…and really…putting these companies on a path to product market fit,” Catalyst Fund Director Maelis Carraro told TechCrunch.

Program participants gain exposure to the fund’s investor networks and investor advisory committee, that include Accion and 500 Startups. With the $15 million Catalyst Fund will also make some additions to its network of global partners that support the accelerator program. Names will be forthcoming, but Carraro, was able to disclose that India’s Yes Bank and University of Cambridge are among them.

Catalyst fund has already accelerated 25 startups through its program. Companies, such as African payments venture ChipperCash and SokoWatch — an East African B2B e-commerce startup for informal retailers — have gone on to raise seven-figure rounds and expand to new markets.

Those are kinds of business moves Catalyst Fund aims to spur with its program. The accelerator was founded in 2016, backed by JP Morgan and the Bill & Melinda Gates Foundation.

African fintech startups have dominated the accelerator’s startups, comprising 56% of the portfolio into 2019. 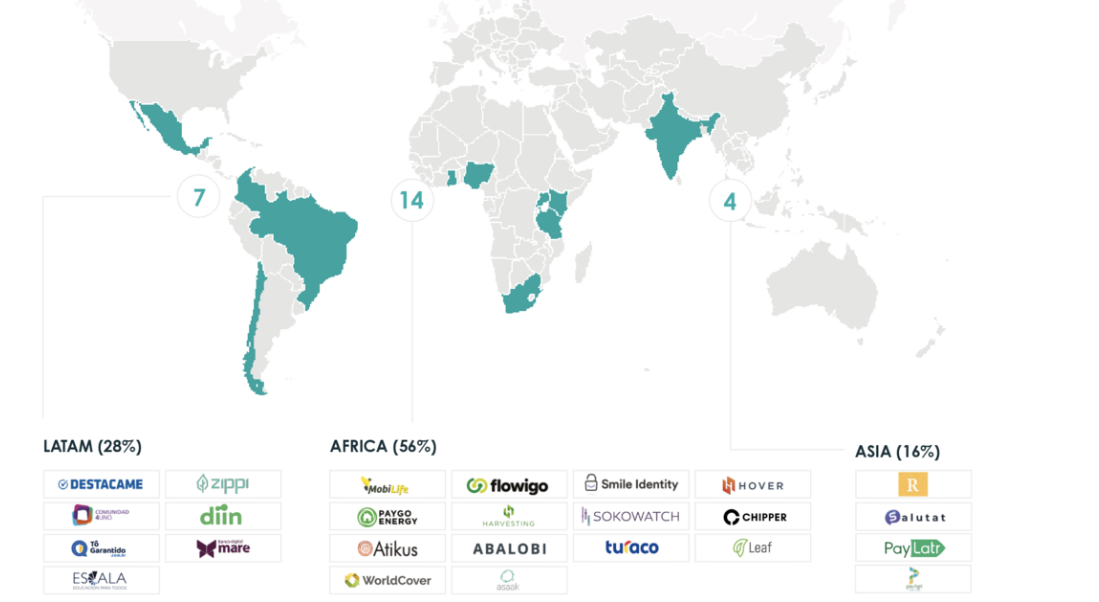 That trend continued with Catalyst Fund’s most recent cohort, where five of six fintech ventures — Pesakit, Kwara, Cowrywise, Meerkat and Spoon — are African and one, agtech credit startup Farmart, operates in India.

The draw to Africa is because the continent demonstrates some of the greatest need for Catalyst Fund’s financial inclusion mission.

By several estimates, Africa is home to the largest share of the world’s unbanked population and has a sizable number of underbanked consumers and SMEs.

Roughly 66% of Sub-Saharan Africa’s 1 billion people don’t have a bank account, according to World Bank data.

Collectively, these numbers have led to the bulk of Africa’s VC funding going to thousands of fintech startups attempting to scale finance solutions on the continent.

Digital finance in Africa has also caught the attention of notable outside names. Twitter/Square CEO Jack Dorsey recently took an interest in Africa’s cryptocurrency potential and Wall Street giant Goldman Sachs has invested in fintech related startups on the continent.

This lends to the question of JP Morgan’s interests vis-a-vis Catalyst Fund and Africa’s financial sector.

For now, JP Morgan doesn’t have plans to invest directly in Africa startups and is taking a long-view in its support of the accelerator, according to Colleen Briggs — JP Morgan’s Head of Community Innovation

This take aligns with JP Morgan’s 2019 announcement of a $125 million, philanthropic, five-year global commitment to improve financial health in the U.S. and globally.

More recently, JP Morgan Chase posted some of the strongest financial results on Wall Street, with Q4 profits of $2.9 billion. It’ll be worth following if the company shifts any of its income-generating prowess to business and venture funding activities in Catalyst Fund markets like Nigeria, India and Mexico.