Arm, the company that designs the chips that power virtually every smartphone and IoT device, published its roadmap for the next two years today. That’s the first time Arm has done so and the reason for this move, it seems, is that the company wants to highlight its ambitions to get its chips into laptops.

So far, Arm-based laptops are far and in-between, though Microsoft recently made a major move in this direction thanks to its push for always connected Windows laptops. While that sounds great in theory, with laptops that only need a single charge to run all day, there’s still a performance penalty to pay compared to using an x86 chip. Arm says that gap is closing quockly, though, while offering a better performance/battery life balance.

Indeed, Ian Smythe, Arm’s senior director of its marketing programs, doesn’t shy away from comparing the next generations of its architectures with Intel’s mid-tier Core i5 processors.

“I think it’s clear that we’re on a transformative path,” Smythe said during a press conference ahead of today’s announcement. “It’s a compute journey that is changing the way that computers are able to be delivered in large screen form factor devices. And our vision is very much around how we’re going to be driving laptop performance from that mobile innovation base and how we’re going to be working with foundry partners to deliver that performance in today’s and tomorrow’s leading processes.”

So what does Arm’s roadmap look like? The details are still quite sparse, but this year, the company will deliver its Cortex-A76 architecture that its partners will likely build using both 10nm and 7nm processes. Next year, it’ll launch its Deimos CPUs, which will most likely all be built using 7nm processes. Come 2020, it’ll launch its Hercules processors for both 7nm and 5nm processes. 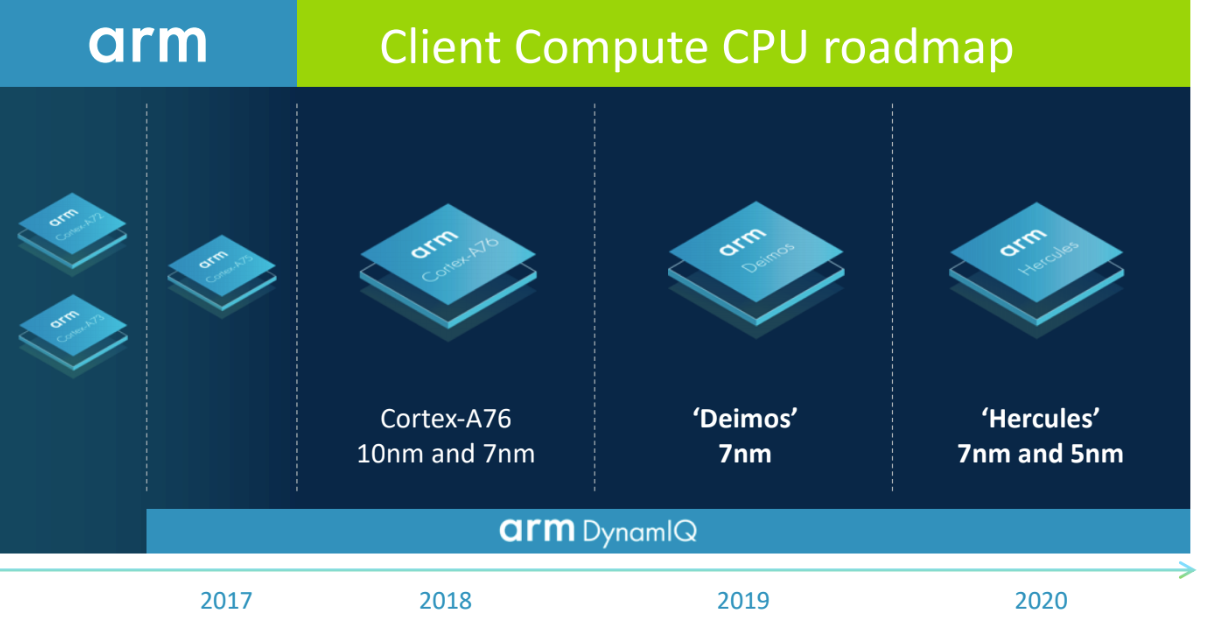 In terms of raw compute performance, the A76 can compete with some Intel i5 chips and Arm promises less than 5W TDP. Raw compute power based on a single benchmark isn’t all there is to making a computer run smoothly, of course, but this signals Arm’s ambitions (and those of its partners) in competing for the laptop market — while at the same time making smartphones far more powerful, too.

Can Arm-based processors really make a dent in the laptop market, though? Smythe surely thinks so. ‘I think with every disruption we created an opportunity,” he said. “That toehold [in the laptop market] can grow when you can demonstrate the benefits. I think that with the first Windows on Arm devices we’re sharing that capability and as we move towards Cortex A76-based devices and beyond, I think that capability and disruption offers opportunity beyond where we are today.”